I’ve fallen for this game. I didn’t realize it right away, but after many improvements, Grand Tactician might be my absolute favorite wargame. From the increasingly complex strategic layer (reminds me of Victoria 2 at points) to the relatively realistic and intense battles, I find myself returning to it repeatedly.

After playing a few full campaigns, I feel that I finally have a grasp of the dang thing. Join me on what will assuredly be a long project, an in-depth AAR and analysis of a campaign of Grand Tactictian. I’ll do my best to include what details I can, but as there’s always so much going on, some things will inevitably get left out. If there are aspects you’d like me to focus more on, to shed more light on areas, give me a shout on Twitter, email, in the Discord, etc., and I’ll adjust accordingly. And for the record, I will be playing on the latest patch, 1.07, which introduces AI updates and machine guns, so hopefully that’ll throw some curveballs into the campaign.

I mention what patch I’m playing on for the fact that this will probably take some time to complete, and the most current version of the game may not always be what I’m playing on my end, so things may get a little weird there.

And one last note: I began writing this AAR and published it before 1.07 came out… and WordPress ate most of the original version of this, so if the images/text in this first diary seem a bit odd, that’s probably why. I had to restart the campaign/rewrite most of the diary. Apologies for any sloppiness.

With all of my housekeeping out of the way, let us embark on our grand journey to defeat a slaver rebellion.

Before the war begins, we have to choose a slate of policies for our Union to pursue. We stick with Industrialization, which will give us a firm industry and a higher population, Union Pacific Railroad, which gives us an economic boost (as well as more railroads, of course), and Abolition, which lowers support for the Southern cause in Northern states.

The game starts us off in late February of 1861. James Buchanan still sits in the Oval Office, Lincoln hasn’t even been inaugurated yet. The standing military of the Union stands at about 2800 men, mostly spread out among forts. The Confederacy lies in its infancy, only comprising of the Deep South, without many of the states that would traditionally be considered members of the CSA.

As the Union player, you can’t do much before the Confederacy declares war on you, or else you’ll incur the wrath of states that see the Union as a tyrant, denying the “right” of the South to secede. As much as this is eye-rolly today, you have little choice as the Union but to work on your policies and industry before the South declares war, typically by some time in April.

Speaking of policy, I’m obviously pursuing the first military policy, as this lets me invest more into what’s currently a fledgling army, as well as financial and industrial policies. These policies all essentially let me “invest” in various projects across the American empire, to make the country more stable, and to hopefully make fighting the war easier. I’m intentionally not pursuing diplomacy, as I haven’t seen European intervention yet, and as much as it would make the game harder for me, I’d really like to let that happen if possible.

After making the initial investments, there isn’t much for me to do for a time. Much like Hearts of Iron, the beginning of one of these campaigns can be slow. There isn’t any war to fight yet, so it’s purely a waiting game in a very literal sense, as you sit and watch news trickle in of the South getting increasingly rowdy, and hoping your policies kick in before the Rebels rush north.

The Confederates also get to build their military faster than the Union player, meaning that I get plenty of newspapers like the below:

They’re raising forces before I can do much of anything. It is, like I said, months of waiting at the start. I’ll take this opportunity to point out one of the interesting features of GT (get used to this abbreviation), the buildings. Cities, plantations, depots, markets, brickworks, foundries, farms, and several other building types are modeled on the map, and they supply resources to the economy or sometimes directly to your military. I will likely mention the need to hold specific points on the map for the reason that they’ll keep a supply line open to the army. Without controlling these points on the map, an army can literally starve, and be combat ineffective.

In short, owning crossroads, towns, and bridges is very, very important, and that’s likely where we’ll see most of the conflict.

All that talk about infrastructure made me decide to throw up my own railroad in Minnesota and Wisconsin. It’s incredibly expensive, but long-term it will increase manpower and overall wealth. What better time to spend large sums of money than before the war, is what I always say.

I also went ahead and began building a fleet, because it couldn’t hurt to really enforce naval dominance early on.

And now we get to the Fort Sumpter situation. 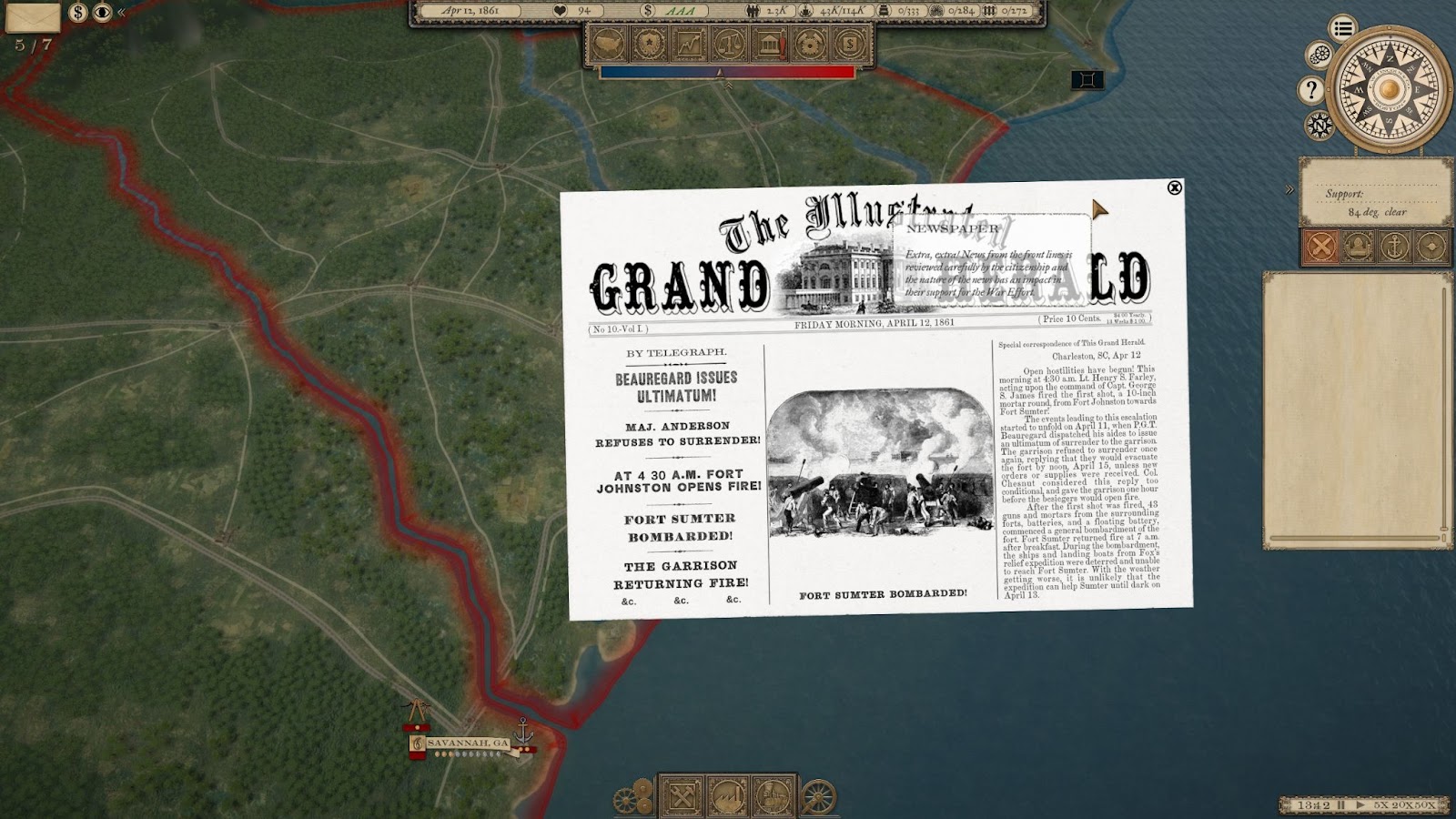 War always follows closely behind the Sumpter crisis- and before I can finish my thought, war breaks out:

So before I wrap up this first AAR diary, let me briefly go over the starting situation for the Union:

We have two armies in Maryland, along the border with Virginia. This is where the bulk of the current army is, with a very impressive Army of Northeastern Virginia deploying over 8000 men. This is, of course, nothing in terms of Civil War armies, but it’s a start.

Next, we have good ol’ McClellan in Ohio with about 5 guys total. The only thing this army has going for it is the fact that it’s not in any immediate danger, unlike the last army…

…which is holding the fort in a now Confederate St. Louis. Suffice to say, it doesn’t look great for me, but the Confederates also don’t have a massive army yet. They have a few in Virginia, but nothing quite so massive as that indomitable 8800 man army in DC.

I’ll wrap this up for now, next time we’ll get to recruiting and seeing if we can bloody the South’s nose before they can consolidate.

Thanks so much for tagging along with me on this project, and I hope you’ll stick with me for the next diary!

Note: There’s now a Part Two, you can find it here.

View all posts by Joe & Jack